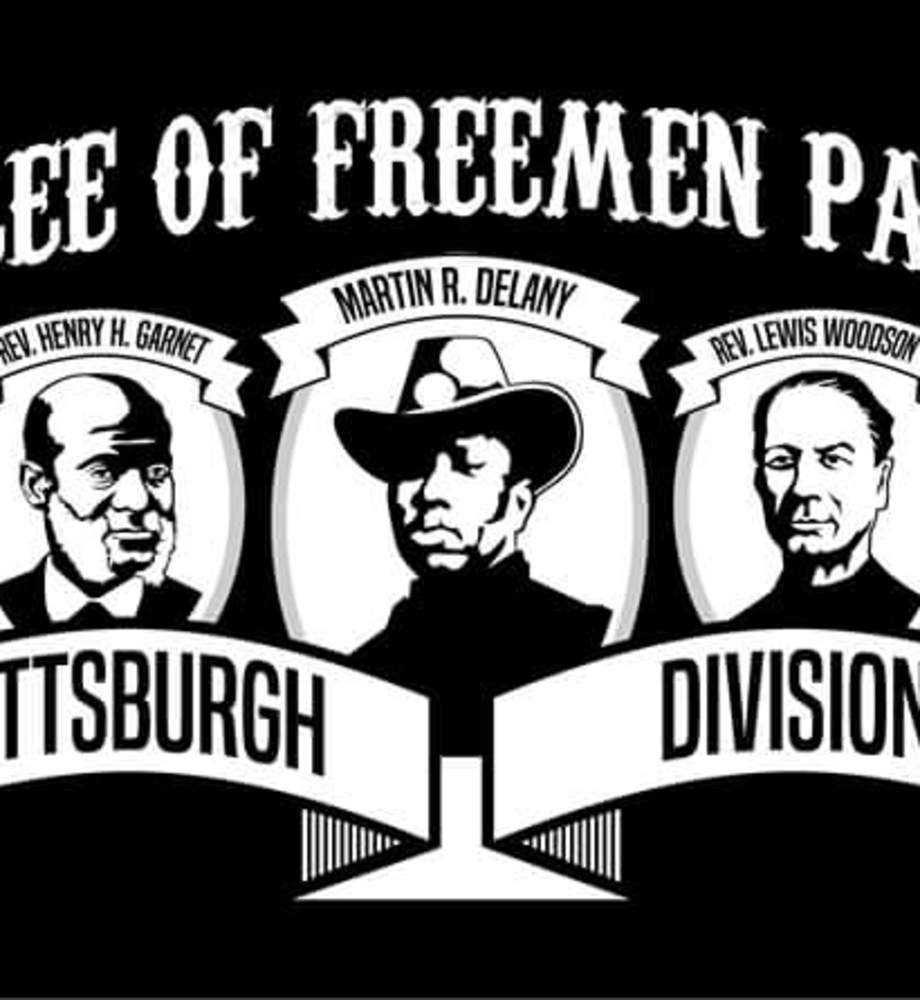 The third division, which was composed of organizations and citizens of this city, formed on Wylie street and marched by the way of Fifth avenue to Penn street, when it took up position with the right resting on Sixth street, in the following order:

The Chief Marshal wore a red sash and his aides blue. They were well mounted and their horses were gaily caparisoned.

Next came a carriage, which was occupied by Aaron Floyd, Uriah Updegraff, Wm. Digby, and Edward Allen, the representatives of the old Liberty Party. The carriages was tastefully decorated with small American flags, evergreens, and one of the occupants carried a large banner with the following inscription: 'What Hath God Wrought.' and on the reverse side, 'The Old Guard Dies, but Never Surrenders. Surviving Directors of the Underground Railroad.'

The United Brethren of Mutual Relief, numbering fifty men, followed on foot, wearing regalia and bearing a stand of colors and a banner on which was inscribed: 'We hold this to be self-evident truth, That all men were created equal.'

The Twentieth Ward club, numbering twenty-five men wearing capes and caps and carrying lances, and proceed by martial band, came next. In the ranks a banner was carried, inscribed as follows: 'Vox Popali, Vox Del'. And another one on which was the following: 'Our next Amendment--A recognition of the Supreme being in the Fundamental Law'. On the reverse side was 'Abraham Lincoln and John Brown, Marty's of the 19th Century.'

The Barbers' Association, numbering about twenty-five men, commanded by Captain Carson, came next. The men were in uniform, mounted on gaily caparisoned horses, and presented a handsome appearance. Hardy's Cotillon band preceded the association, and in the ranks was a banner on which was the following inscription: 'True to our God, True to our Country, True to our Friends.' On the other side--- 'Equal Rights for all--Chartered Privileges to none.'

Five wagons, handsomely decorated with flags and evergreens, followed, carrying pupils of the Wylie Street Sunday School. The inscriptions on the banners and streamers were: 'Our highest aim is to be Peaceable, Law abiding citizens.' On the other side 'We vote for Ritner.' ...

After these came two wagons, carrying the sons and daughters of Samaria, numbering forty-four children, carrying appropriately inscribed banners. They were followed by a wagon containing representatives of Wesley Church...

Following the two wagons, in which were representatives of Grace Memorial church, bearing two beautiful silk banners, upon which were Latin and Hebrew inscriptions. The wagons were tastefully decorated with flowers and evergreens...

Next came a delegation of horsemen, numbering one hundred. Then following fifty carriages, containing citizens both black and white, male and female. Following came the rear guard, which  was a platoon of the Mayors police, numbering twenty-four men, commanded by Lieut. Barker, assisted by Lieut. Wilmot. [This was the end of the Pittsburgh Division]”

... On arriving in Allegheny the various delegates halted at the Commons, where two stands for speaking had been erected. The attendance was exceedingly large, and general good cheer prevailed on all sides. Fully [FIVE] thousand persons, men, women and children, of all ages ... and colors made up the assemblage."